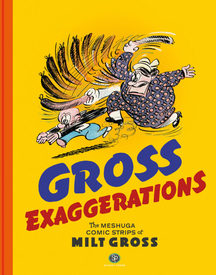 We got our hands on a couple of these gigantic (13" x 16") deluxe Sunday Press hardcovers, if anyone is interested...

Sunday strips and illustrations from the king of screwball comics

The hilarious comics of Milt Gross were born of the Yiddish humor in vaudeville and grew to lampoon all the foibles and quirks of everyday life. Here is a curated collection of the major comic strips of Milt Gross— Nize Baby, Count Screwloose, and Dave’s Delicatessen —along with other comics, books and illustrations from his prolific career. Most of these lost gems have never been reprinted before!

Ivan Brunetti sez:  "Genius can manifest itself in two ways: the unfathomably complex, and the unfathomably simple. Milt Gross belongs to the latter category. He is one of the all-time great cartoonists because he makes the craft integral to the entire endeavor look so easy, even enjoyable. When I envision the word “cartooning” in the dictionary, the accompanying illustration is always a drawing by Gross: Nize Baby, Iggy, Count Screwloose, or any number of walk-on characters from his strips. These spirited drawings embody cartooning both as noun and verb. Gross is an elemental force, and his command of line and form convincingly argues for cartooning as the purest, the most natural, instinctive, and expressive—it’s tempting to say the only—way to draw.

Mark Newgarden sez:  "Gross was first and foremost a product of American popular culture and operated with the understanding that his latest gag had already begun disintegration on contact with oxygen (as all popular culture must). And while his generation’s bag of tricks has been long absorbed into the hardpacked humus of cartooning convention, this restless artist’s best work remains a revelation, compulsively energetic and still uncompromisingly funny. His mature line work in particular maintains a markedly fresh vigor and offhanded edginess that offers up as much a whiff of the avant-garde as of a Bronx-bound IRT."

Is Diss a System?