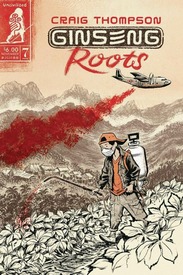 This time around, Ginseng Roots reveals yet another surprising link in the global ginseng chain.  Here in the seventh issue of the series, readers are provided with a nuanced, moving and valuable perspective on the Laotian Hmong, their involvement with the United States forces during the Vietnam war – both as soldiers in support of the US war efforts, and as victims of those same efforts – and the eventual resettlement of some, post-hostilities, in the US; a few of which ended up cultivating ginseng in Wisconsin.  This issue reveals yet another thread in the amazing tapestry of American immigration, and there's more in this story to come – in the next issue of Ginseng Roots!

This item belongs to the categories: standard pamphlet comic book
This item is part of the series: Ginseng Roots
You may also enjoy these related titles: