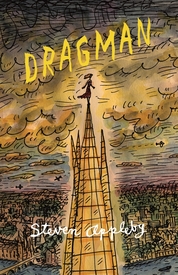 There's a new superhero in town... Dragman!  A British cartoonist, illustrator, co-creator of a radio comedy series, an animated televsion series and one mucial play, Steven Appleby had not yet undertaken a graphic novel – until now.  This 300+ page hardcover is drawn in loose pen and ink and assiduously employs the nine-panel grid, in chapters that alternate between full color and duotone, to tell the story of August Crimp, mild-mannered cross-dresser who must battle crime, greed and cruelty along with his own personal issues and inner demons, in drag and out.