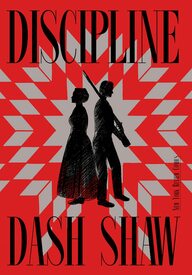 Discipline, the latest comics work from Dash Shaw, has been in the works for over five years.  Shaw set himself the difficult challenge of creating a calm, still work about war – specifically the American Civil War – one that would embody the Quaker ethos.  Whereas most fictional depictions of war focus on strategy, technological prowess and valor on the battlefield, or, conversely, on the tragedy, absurdity and horror of war, Discipline focuses instead on the moral quandaries of war.  These are approached within a philosophical matrix firmly grounded in the traditional Christian ethics of the Quaker faith, which hold, among much else, that one should, when attacked, turn the other cheek and “that no man overcomes his enemy until he has made him his friend.”

The core of Discipline’s narrative involves one Quaker family living in Indiana as the country descends into Civil War, and focuses primarily on the two children who come into adulthood amidst the turmoil of war.  The brother, impetuous, headstrong and full of youthful energy finds himself, despite his faith, unable to resist the siren song of soldiering, and so heads off and joins the Union army, much to his family’s dismay, while the sister stays at home and deals with the consequences of her brother’s actions, as they effect not only her community and family, but also, ultimately, herself.

The primary achievement of Discipline is its form.  It manages to evince the intimacy of a rough, sketchbook diary recording the impressions of the events on their participants along with the inner thoughts and feelings so generated while simultaneously weaving an intricate narrative.  Some readers will doubtlessly find the rough, sketchbook quality of some of the illustrations and page layouts unappealing and seemingly lacking in craft, but their employment here is clearly deliberate and crucial to forging the matter-of-fact representational style that is key to conveying the work’s perspective on war.

The emotional impact of (the aptly titled) Discipline slowly and steadily builds, its narrative gathering force throughout its ten chapters, spread over nearly 300 pages. This force is not released in any cataclysmic conclusion, but is instead held and gradually diffused into lived lives, providing the necessary moral ballast to stay steady on.

This item belongs to the categories: Copacetic Select, Gift Catalogue
You may also enjoy these related titles: