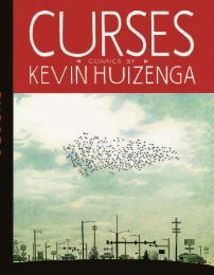 The much anticipated first collection by up-and-coming-new-comics-champ, Kevin Huizenga is at last on our shelves.  Its arrival may, however, signal the end of Huizenga's status as an up-and-comer, and initiate his ensconsement in the ranks of established contemporary masters of comics.  This volume brings together a wide range of Huizenga's work from a wide variety of sources.  It starts off with a little known (well, not to long time Copacetic customers) gem from the Orchid anthology published by Sparkplug Comics, titled, "Green Tea."  It is adapted from a classic Victorian horror story of the same name by Sheridan Le Fanu, but is given the inimitable Huizenga treatment and stands as an original work.  Following this there is:  the trilogy that first appeared in Drawn and Quarterly Showcase #1; almost the entirety of the now out of print first issue of Huizenga's ongoing solo title, Or Else; a 2-pager originally done for Time Magazine; and the full color story, "Jeepers Jacobs," originally executed for Kramers Ergot 5.  Anyone not already familiar with these works is heartily encouraged to consider this a great opportunity to read some excellent comics delivered in a fine package for a reasonable price.  If you're looking for comics by Huizenga, and you haven't already purchased these works in their original manifestations, then this is the book for you!   PLEASE NOTE: Originally published in 2006, Curses is long out of print.  We have just a couple copies remaining... GONE! (for now; we're always on the lookout for other copies...)

This item belongs to the categories: Gift Catalogue, Copacetic Select, Collections
You may also enjoy these related titles: