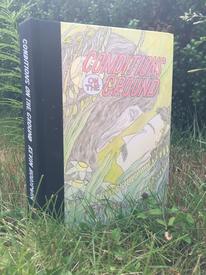 Based on the evidence provided by this voluminous volume, Kevin Hooyman likes comics.  He likes to read them; he likes to draw them; he likes to assemble them; he like to publish them.  Comics are good.  Anyone who feels similarly, would do well to pick up this pleasingly designed, hefty, 350+ page hardcover tome and leaf through it; just open it at random and read whatever you find.  Comics about life in all its zany aspects is what this book is about, and comics is how the stories are told, comics that are steeped in the ways of the world and, especially, the world according to comics, and, specifically, the ways of seeing that comics engenders.  The line employed here has something of Gahan WIlson about it, and, naturally enough, because they're comics, the stories have a bit of Kirby about them, specifically, early-sixties, pre-superhero Marvel Kirby.  There's much more informing these comics, as well.  We've posted a preview on ello, HERE.  Check it out and prepare to discover the conditions on the ground... gradually, the hard, defined edges of the world around you will soften and fade, as you find yourself slowly transitioning to another, mellower way of being.

Now on sale for a SPECIAL PRICE!!