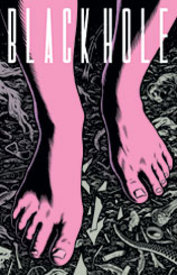 It's over!  Ten years after #1 started it off, #12 closes the curtains on what has to rank up there as one of the greatest limited series in comic book history.  It is a work that transcends the generic conventions it employs to tell an exquisitely haunting tale of teenage alienation that cuts to the core of what it is like (or, at least, was like, in the 1970s) to grow up in the United States of America when forced to confront and come to terms with the animal being that every human being contains within.  Even though it's been nearly a year between issues on average, every issue has been worth the wait, and this one is certainly no exception.  It's a surprisingly satisfactory conclusion and not at all what we expected.  Black Hole is a masterpiece and Charles Burns is an artistic genius who, through applied, long-term, disciplined focus, has managed to channel what could have remained simply an obsession, into a great body of work of which this series is the climax.  Let's all offer him a hearty round of applause!

This item belongs to the categories: standard pamphlet comic book
This item is part of the series: Black Hole
You may also enjoy these related titles: