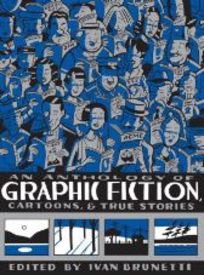 This is an awesome anthology and a worthy successor to McSweeney's 13 as the must have comics collection of the foreseeable future.  Brunetti goes all out to offer us a definitive picture of the power and range of the form with the 400 pages of comics here on display.  The contents range far and wide as the list of creators below amply demonstrates.  A moveable feast, indeed.   With but a sprinkling of exceptions -- nods to a select handful of progressive progenitors -- all the work herein contained was produced during the last twenty-five years.

What we have in this anthology is an attempt by Brunetti to forge a (OK, well, his) comics canon where it is the form itself that is always at the heart of the work represented.  The work we find here -- while, of course, being comics -- is also, at some level, telling us something about comics, and this latter value-added feature can be attributed in no small part to Brunetti's editorial approach in assembling this work, which he clearly views as an organic whole.  Each artist represented in this collection has a distinct and original approach to the medium that embodies their personal interaction with the comics form as well as -- and this is where this anthology is unique -- with each other piece in the book.  This book is organized around the principal of association.  The pieces are grouped in clusters that are related in a wide variety of ways, from the form and content of the work to the geographic region and ethnicity of the creators.  Brunetti tips his hand right at the outset by starting with the raw, unbridled, free-associative works of Marc Bell, Sam Henderson, Mark Newgarden, Kaz, Tony Millionaire and Bill Griffith (who all, with the exception of Bell, have NYC connections as well).  This approach yields many surprising and unexpected connections as well as much that that proceeds in due course.

This is the perfect book to share with those poor lost souls who still feel compelled to look down their noses at comics due to childhood brainwashing or simple lack of exposure.  The fact that it is published by no less than Yale University -- the alma mater of the last 3 presidents  -- should  cause them to at least open their eyes a bit, at which point we feel confident that the material contained herein will shine a light into the dark, comics-snubbing corner of their being and illuminate their ignorance, and thereby open them to the potential of a nourishing, life-long relationship with the power and wonder of comics.

It's worth pointing out that Schulz's contribution is his 1959 essay, "How to Develop a Comic Strip," that was originally published by Art Instruction, Inc.  And, no, Daniel Raeburn isn't a comics artist in his other identity (although, then again, maybe he is...): his contribution is an excerpt of his essay on Clowes that constitutes The Imp No.1, and it provides a fitting close to this anthology.

This item belongs to the categories: Gift Catalogue, Copacetic Select, Anthologies
You may also enjoy these related titles: