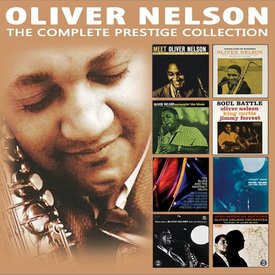 These classic recordings span the years 1959 to 1962 and feature Oliver Nelson working with some of the greats of the era, including Roy Haynes, Kenny Dorham, Eric Dolphy, Bill Evans, Paul Chambers, Freddie Hubbard, Johnny Smith.  Oliver Edward Nelson (June 4, 1932 – October 28, 1975) was a technically dextrous saxophonist with excellent control and wonderful tone who could take off and really soar.  He was also a challenging and original composer, a thoughtful arranger and a capable bandleader.  The vast majority of the 48 tracks on the 4-disc box set collecting 8 LPs were composed and arranged by Nelson himself.  While Nelson ackowledged that his own approach to the saxophone was greatly influenced by John Coltrane, he was a singular composer whose work is too often overlooked.   The soulful, well constructed pieces presented here will amply reward repeated listenings and very much stand the test of time.

We should take a moment to point out that this collection is somewhat misleadingly named, as, while it does contain the complete catalogue of Nelson's Prestige LPs, there are a number of LPs included that were not originally released on Prestige, and, most significantly, it includes Blues and the Abstract Truth, which, while it was recorded and released in 1961, in the chronological middle of Nelson's Prestige catalogue, and was recorded at the Van Gelder studio, along with all the others in this collection, was released on Impulse!.  This is almost certainly Nelson's most widely esteemed LP, so we're glad it was included!

All tracks written by Oliver Nelson, except where noted.

The Blues and the Abstract Truth

All tracks composed by Oliver Nelson.

All pieces by Oliver Nelson, unless otherwise noted.

All compositions by Oliver Nelson, except where noted

All tracks composed by Nelson.

His Classic Collaborations 1956-1963 by Duke Ellington 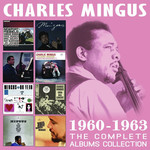