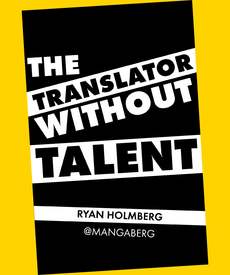 The Translator Without Talent
Ryan Holmberg
published by Bubbles Press

It's here: the first book from Bubbles Press!

This is, more or less, a compilation of Holmberg's amazingly detailed Instagram posts, fleshed out with additional commentary and an introductory essay.  To the best of our recollection, the seed for this book is an actual exchange on one of Ryan's Instagam posts, wherein Brian enthused, "These posts are so great, you should collect all of these posts into a book!" and Ryan replied, "I think YOU should collect them all into book."  And the rest is history...

"Despite having only two dozen manga translations, 80 essays, 50 reviews, one exhibition pamphlet, and zero solo- authored books to his name, Ryan Holmberg, PhD, is widely regarded as the biggest fish in the puddle-sized sea of alternative manga in the Anglosphere. Fresh off a major professional setback, in 2017 Dr. Holmberg departed for a two-year stint as a Visiting Professor at the University of Tokyo, where he would commence to document his research findings, translation troubles, and escapades with aging manga artists in a series of detailed Instagram posts @mangaberg. Since returning to the United States in the fall of 2019, Dr. Holmberg has continued to undermine his academic career as a so-called “comics scholar” by spending way more time than he should, and sharing more about his personal life than he should, on his Instagram account.

Collecting nearly 400 pages’ worth of behind-the-scenes peeks into the nitty-gritty of manga research—as well as a never before published manifesto of Dr. Mangaberg’s musings about comics translation—THE TRANSLATOR WITHOUT TALENT is a tell-all slog through two-plus years of activity of your favorite nose-in-the-mud manga scholar. This genre-defying volume spotlights some of the best and weirdest alt-manga and gekiga artists, with extended tangents into the politics of nuclear power and social discrimination in Japan. It is perfect for anyone obsessed with obscure, amazing, and all-too-frequently retrograde manga, but does not have the patience to scroll through a lengthy Instagram feed. Comics studies has never before seen anything like THE TRANSLATOR WITHOUT TALENT, and it may never again. Published by the comics and manga fanzine BUBBLES in its first foray away from the xerox machine.!

SECOND PRINTING AVAILABLE (but now almost gone!) We are seeing if there are any left.  Please check back...