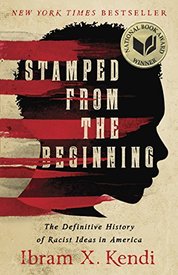 While this book has been enthusiastically sold in our shop since shortly after its publication, we now feel that it should also be offered here as well.  The single most important work of history to arrive at Copacetic during the course of its operation, Stamped from the Beginning is a tour de force that will forever alter our views of the history of race – and racial relations –  in America, first and foremost, but, ultimately, throughout the entire world.   It’s author, Ibram X. Kendi has written a book that embodies a truly rare combination of abilities:  that of the dedicated, focused, rigorous research needed to marshal historical facts; that of the intellectual strength necessary to recognize key patterns as they emerge from this research, and so make new connections that result in an original vision of history; and that of crafting the propulsive, engaging, jargon-free prose that can effectively communicate the insights and discoveries underpinning this vision in such a way that pulls readers up the mountain of his thesis so they can stand where Kendi stands and see it all for themselves.

Stamped from the Beginning's 582 pages are divided into five parts, each narratively organized around the life and times of a historical figure representative of their era: Cotton Mather, Thomas Jefferson, William Lloyd Garrison, W.E.B. Du Bois, and Angela Davis.  Each of the five parts is sub-divided into multiple chapters focused on a specific aspect of the period(s) covered, and is in no way confined by its titular figure, but rather roves far and wide through its respective era(s) to bring the reader into contact with a great deal beyond what one might expect from such an organizational strategy.  This approach allows a multitude of perspectives which are simultaneously unique and connected to that of the central figure, assisting in guiding the reader through the complexities of both evidence and argument.

Kendi historically locates the invention of “race”, and reveals this invention to be at the root of the implementation of racial discrimination through racist policies, laws and regulations.  He goes on to forcefully – and irrefutably – demonstrate that the institution of racism which we today confront has been deliberately constructed by the dominant, hegemonic class – led largely by the wealthy and powerful among us – with the aim of maintaining and extending their wealth and power through the ages.

While a very different book, Kendi’s Stamped from the Beginning can be approached as a companion text to Howard Zinn’s epochal work, A People’s History of the United States.  As Zinn shifted the frame of history from the one which had traditionally been taught at school, as seen from the perspective of the culturally and politically hegemonic ruling class, to that of the common people, the working class, Kendi shifts the frame of history from that of the crafters and promulgators of the racially discriminatory (racist) ideology which has been used to perpetuate the position of this ruling class, to that of the lived experience of those subjected to that ideology.  Kendi goes further, however, in that his reframing involves an original synthesis that provides a framework for the deconstructing of a society based on racial discrimination and racist ideology, as well as the tools with which to take it apart – and, crucially, to begin to build a new, more just and equitable one in its place.