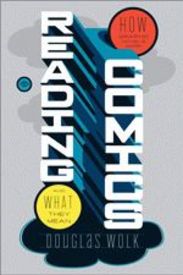 Reading Reading Comics has led us to the decision to anoint Douglas Wolk as the budding Andrew Sarris for comics.  While Reading Comics is not a work that is ready to go one on one with Sarris's The American Cinema, Wolk is an obviously literate individual, a clearly articulate writer, and possessed of a discerning eye.  Reading Comics is a fine volume that will be engaging to many a comics enthusiast, and will be especially valued by the comics novice who is working to get up to speed.  Mr. Wolk is also an opinionated reviewer, so chances are you won't always find yourself in agreement with him.  He has, in fact, already generated several small scale controversies -- but controversy often clears the air and can be healthy (read an excerpt of Reading Comics and get a taste of some of the controversy).  His arguments are, generally, well constructed, so you are able to see where you stand in regards to his perspectives.  We suspect, however, that an obsessive fanboy lurks still within him, based on the evidence of this in-depth account/deconstruction of DC's 52 Weeks.  In short:  If you like reading about comics, then there's a good chance Reading Comics is for you.