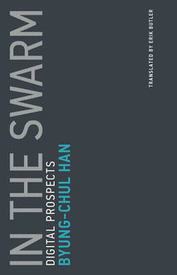 In the Swarm presents a cogent response to the rising tide of internet inf(l)ected consciousness that is deeply rooted in the European – primarily German – philosophical tradition, but don't let that scare you off.  This slim tome, judiciously translated from the original German by Erik Butler, is straightforward and gets right to the point in sixteen concise chapters, each focused on a facet of the problem currently confronting us:  the gradual yet seemingly ineluctable erosion of human agency resulting from our ever greater immersion in the sea of information.  Written in 2013, this book was clearly ahead of the curve and will impress any attentive reader with its multitude of insights (Han's formulation of "outrage culture" was eerily prescient).  While most American readers, more optimistic by nature than their European counterparts, will be likely to find themselves resisting Han's more dire conclusions (mostly implicit), there is no escaping the force of his arguments; they must be confronted and counter arguments must be made.  Let the dialectics begin!