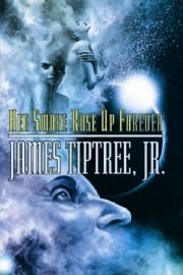 Her Smoke Rose Up Forever
by James Tiptree, Jr.

This is a moment we've been waiting for for quite awhile.  In our opinion, the least appreciated and most misunderstood science fiction writer of modern times, James Tiptree, Jr. (the nom de plume of Alice Sheldon) is a writer of breathtaking originality who is still  ahead of her time, nearly twenty years after her death.  That all of her work -- with the exception of a single "loose ends" collection that was published three years ago -- has been out of print for years is, in our opinion, a negligence that borders on the criminal.  Thankfully ("Thank you, Tachyon Publications, thank you."), this situation has now come to an end with the release of this 508 page volume, a paperback re-issue of the posthumous Arkham House collection which has to stand as the best single-volume edition of her work ever released, putting together eighteen of her most penetrating and insightful stories, all of which were originally published between 1969 and 1981.

•The Last Flight of Doctor Ain
•The Screwfly Solution
•And I Awoke and Found Me Here on the Cold Hill's Side
•The Girl Who Was Plugged In
•The Man Who Walked Home
•And I Have Come Upon This Place By Lost Ways
•The Women Men Don't See
•Your Faces, O My Sisters! Your Faces Filled of Light
•Houston, Houston, Do You Read?
•With Delicate Mad Hands
•A Momentary Taste of Being
•We Who Stole the Dream
•Her Smoke Rose Up Forever
•Love Is the Plan and the Plan Is Death
•On the Last Afternoon
•She Waits for All Men Born
•Slow Music
•And So On, and So On

Each of these stories demonstrate specific and profound understandings that deeply engage -- in turn and sometimes together --  the fields of psychology, sociology, anthropology and biology and that are found nowhere else in literature.  While much is made -- and rightly so -- of her great empathy for the plight of woman in a man's world, the greatest gift she offers is her singular interpretation of the relationship between the sexes, and her ability to describe how this relationship, in turn, touches absolutely every aspect of existence -- with a special focus on and uncanny insight into how the sexual relationship is woven into the fabric of societies.  When considering her entire œuvre as a whole, this description is so comprehensive as to make a strong case that it is this relationship that is the axis about which all else revolves.

The Screwfly Solution, one of the most perfect horror stories ever penned, tells the story of the end of the human species as experienced by a scientist and his wife.  Structured around an epistolary center and intercut with news clippings, the story slowly and expertly reveals the chilling reality that lies behind a mysterious but gradually more horrifying series of unfolding global events.

Houston, Houston, Do You Read?, presents the ultimate -- literally -- in the battle of the sexes, telling the story of a group of (male) NASA astronauts who inadvertently travel through a galactic singularity which results in their returning to an earth that has moved into the future without them.  On this earth, only females remain, and reproduction is through cloning.  The astronauts, still living with their ancient mindsets ( i.e. our present attitudes) are unable to accept this state of affairs and attempt a sort of male coup.

The Girl Who Was Plugged In, one of her most widely lauded stories, chooses a particularly graphic metaphor to describe the insidious hidden cost of humanity's ever increasing dependency on escapist media entertainment.

Many of Tiptree's most successful stories explore alien lives and societies, and their interactions with humans with such depth and empathy that sometimes it's hard to keep in mind that she's making it all up (or is she?).  We Who Stole the Dream is a heart-breaking tale of rebellion on an alien world.  With Delicate Mad Hands presents an unforgettable tale of first contact on an alien world.  Love Is the Plan, the Plan Is Death goes a step further and tells a story of alien life in the first person, in an effort to universalize the reproductive drive by rendering it in as basic a formula as possible.

A Momentary A Taste of Being is Tiptree at her most cosmic.  Her longest story, it constructs an act of sexual reproduction on a scale that truly boggles the mind, in which humans function as sperms traveling in a rocket that (inadvertently) penetrates a galactic egg; but it is consciousness itself that functions as the DNA.  This description really doesn't do the story justice, as it is really in the reactions of the participants involved as they experience all this that the real meat of the story lies.

And that's not even half of what the book has to offer.  Keep in mind, too, that as good as this collection is, it's still only a greatest hits collection:  there is more, much more.  Tiptree's life is  hands down the most fascinating of any science fiction writer in history, but was woefully under documented -- UNTIL NOW!  An amazing biography was published in August 2006 and is currently available.  Ten years in the works, this is a book we heartily recommend.  There are, in addition, some fine Tiptree resources on the web.  Without any doubt, the best place to start is the James Tiptree, Jr.  World Wide Website; for a quick look at a good (but not fully complete) bibliography of works by and about Tiptree, here's a Tiptree Bibliography; and here's a decent profile.

As the work of Philip K. Dick was widely ignored by the general public (despite the fact of his huge reputation and influence within the SF community) before the release of Blade Runner initiated the process that resulted in his (posthumous) ensconcement in the terra firma of American culture, so is the work of Tiptree today.  While this analogy only goes so far -- PKD's career output dwarfs that of Tiptree, and his reputation within the SF community has always eclipsed hers by a large margin, except perhaps for a relatively brief period in the mid-'70s when Tiptree's work was at its zenith -- it holds true at its core in that there are ideas and concepts at the center of Tiptree's work that are -- like those of PKD's -- every bit as unique, prescient, and important to the future that we find ourselves moving ineluctably toward.  We would do well to explore, understand and, finally, disseminate these ideas and concepts as widely as possible; and sooner rather than later.  The literary legacy left by Alice Sheldon is a unique and valuable resource that we should all be thankful for.