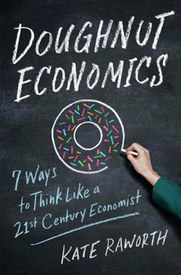 If you’re looking for a book to start off 2021 with, a book that will set your thinking on a fresh path and that by doing so will help extricate us, as a society, together, out of our present dark morass, and to provide a strong, sensible, workable basis on which to build a better tomorrow, then look no further – Doughnut Economics is that book.

Kate Raworth is an educator, researcher and activist currently based at Oxford University’s Environmental Change Institute who is both smart enough and strong to recognize and identify the errors in the reigning economic theories that underpin the global capitalist systems and how they have led to the glaring inequities that are destabilizing the system and where they are the root cause of so much suffering.  Raworth illustrates how these inequities and suffering are both unnecessary, the result of intellectual failures as well as moral ones.

A key to her success – and to her appeal to us here at The Copacetic Comics Company – is that Raworth is a keen and perceptive visual thinker.  She understands how pictures, in addition to being "worth a thousand words”, often form the basis for entire schools of thought.  She employs these insights in dexterous deconstructions of some of the key diagrams and charts that underpin textbook economics and points out where they go wrong and/or what they’re missing.  More to the point, she has created a series of incisive and inclusive diagrams of her own, none more important than – yes, you guessed it – The Doughnut, which lies at the center of this work, and, in fact preceded and inspired it.

Even should you have no prior interest in economics or economics theory, this may be the book that changes your mind, for part of its remit is to show that, indeed, just as you suspected, much economic theory is simply ex post facto justification of the historical hierarchies of class, gender and race, and, not only that, but in addition, that too much of the theory that seeks to overturn "the establishment" partakes in many of the same fallacies as the traditional economic theory it is opposing, simply occupying the opposite side of the argument. Doughnut Economics seeks to forge an entirely new paradigm employing a new way of seeing and, crucially, a new way of organizing economics around the needs of people and the planet, rather than the needs of the holders of capital assets.  Here's a quick – and visually oriented! – capsule summary.

If you’re interested enough to explore this a bit further to see whether or not this book’s going to be worth your while, then take a chance on spending a few minutes with this BBC video that features Raworth and The Doughnut.