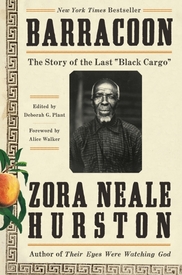 We'd heard tell that Hurston had something like this in her unpublished papers.  Now, at last, 90 years after these notes were first set down on paper, Hurston scholar, Deborah G. Plant has assembled them into this volume.  Barracoon is, as it's subtitle states, the story of the last "black cargo." We'll let the jacket notes take it from here:

In 1927, Zora Neale Hurston traveled to Plateau, Alabama, to visit eighty-six-year-old Cudjo Lewis, a survivor of the Clotilda, the last slaver known to have made the transatlantic journey.  Illegally brought to the United States, Cudjo was enslaved fifty years after the slave trade was outlawed.

At the time, Cudjo was the only person alive who could recount this integral part of the nation's history.  As a cultural anthropologist, Hurston was eager to hear about these experiences firsthand.  But the reticent elder didn't always speak when she came to visit.  Sometimes he would tend his garden, repair his fence, or appear lost in his thoughts.

Hurston persisted, though, and during an intense three-month period, she and Cudjo communed over her gifts of peaches and watermelon and gradually Cudjo, a poetic storyteller, began to share heartrending memories of his childhood in Africa; the attack by female warriors who slaughtered his townspeople; the terrors of being captured and held in the barracoons of Ouidah for selection by American traders; the harrowing ordeal of the Middle Passage aboard the Clotilda as "cargo" with more than one hundred other souls; the years he spent in slavery until the end of the Civil War; and finally his role in the founding of Africatown.