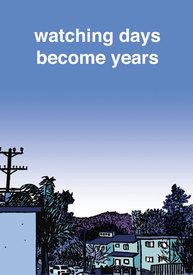 Watching Days Become Years #1
Jeff Levine
published by Sparkplug Comic Books
"Wise is the man who monotonizes his existence, for then each minor incident seems like a marvel."

This forty page comic book published by Dylan Williams’ fledgling Sparkplug Comic Books presents a distillation of the last five years of Jeff Levine’s life.  It’s a heady prospect, five years in forty pages.  That’s quite a concentration.  Can Levine pull it off?

Well, let’s do a quick inventory: One front cover; one Kierkegaard quote; twenty-three strips; and an interlude.  Let’s start with the cover.  It is simple and understated, yet nonetheless dramatic, and the coloring is just spot on: that glimmer of light just below the horizon that gradually fades to blue at the zenith really captures that moment of transition:  whether one perceives the light as waxing or waning -- in other words, whether this is a sunrise or sunset -- is pretty much up to the eye of the beholder; sort of like whether a glass is half full or half empty.  Whether it is dawn or dusk, it is the ambivalence that makes it.

Moving on, the Kierkegaard quote is short enough, so here it is: “But he who does not comprehend that life is a repetition, and that this is the beauty of life, has condemned himself and deserves nothing better than what is sure to befall him, namely to perish.”

OK, with this quote we’re getting closer to how one can distill five years into forty pages, but we’re not there yet.  Of the twenty-three strips, which are arranged in chronological order,  the majority are one-pagers that appear to be done entirely in pen, employing the fairly minimal rendering style with which Levine has long been associated.  With the exception of the opening shot, the ironically titled “The Last Page,” all these stories can be seen as implicitly serving to illustrate the Kierkegaard quote: each represents a moment that has clearly been repeated-- some merely a handful times, while others perhaps hundreds, or even thousands.  Only “No Second Acts” directly and explicitly confronts the theme of repetition.

There are several longer pieces as well.  Of these, on all but the longest -- the aforementioned six-page epic, “No Second Acts”-- the art loosens up a bit, employing broad brush strokes, and ink wash as well.

Throughout Watching Days, the text is entirely narrated.  There are no word balloons.  These stories are all interior:  we are watching the days become years through Jeff Levine’s eyes.  And the text is fairly minimal.  So much so that the repetition of certain words stands out.  Bed.  Blankets.  Clothes.  Shoes.  Beers.  Coffee.  Home.  Work.  Never.  You.  These nouns -- abstract as well as concrete, but common all (no proper nouns here) --  and the phrases that accompany them function, despite their frequent reference to materiality, primarily as the landmarks of an interior landscape, the signs of the repetition that is the beauty of life as Levine comprehends it.

The last story, but for the back cover, “It’s a Long Way Down,” is a departure.  Beginning with the lines, “A slightly demoralized forgiveness,” it brings us to the point that Levine has come to in his life, the point at which he is now finally ready to take a breather, step back and share his thoughts with us: a slightly demoralized forgiveness.  Who or what exactly is he forgiving?  His family?  His friends?  His readers?  Himself?  God?  Or is it life itself that he is forgiving for its disappointments?  Whatever our interpretation, and regardless of his intention, “It’s a Long Way Down” finds Levine employing  new strategies.  Each of this story’s five pages is distinct from the others in its choice of representational objects, but within its borders each is visually homogeneous.  It opens with a full page of fairly abstract visuals which appear to be rain clouds, but could easily be something else altogether, and in which the accompanying text is clearly describing internal states.  This is followed by a page full of avian portraits accompanied by text which seems to be a projection of internal states onto external objects.  This in turn is followed by a page which involves -- intriguingly -- the employment of what are clearly elements of Hollywood iconography to represent... what exactly?  One might easily say anger, which would be in direct opposition to the opening sentiments of forgiveness.  Perhaps he has managed to forgive life, but not the movies...  Page four returns us to the corporal body of the artist, this time represented as an amalgamated rear-view refraction, in which he is, “drowning in dreams” (perhaps those produced in such great abundance by that dream factory, Hollywood). And finally, the story closes on hands rolling a dollar, hands that at first are represented as seen from a third-person perspective, but that are shown in the last panel clutching the now fully rolled dollar -- presumably in preparation to snort some drug or another -- in a position that implies a first person perspective, asking the reader to identify with the artist for this closing panel*, in which the text reads, “or maybe never,” returning us to the opening sentiments of demoralization.

The issue literally closes with the back cover strip, which briefly depicts a game of solitaire along with headings that combine to read, “just watching another day.”

In Watching Days Become Years, Levine has struck his own unique vein in the mine first discovered by Harvey Pekar in American Splendor:   namely, the interior life of the average guy with a regular job, the guy at the bar, the guy on the bus, the guy at home watching TV.  It’s about trying to uncover beauty amidst the bland and even the ugly; it’s about trying to locate the eternal in the quotidian; and finally, it’s about striving to forge a personal style in and through which to represent the little epiphanies that are always there, and need only be looked for and then seized to bring a brief brightness of joy to illuminate what might otherwise be dark, dull and drab days.

This item belongs to the categories: Small Press Comics, Copacetic Select, standard pamphlet comic book
This item is part of the series: Watching Days Become Years
You may also enjoy these related titles: