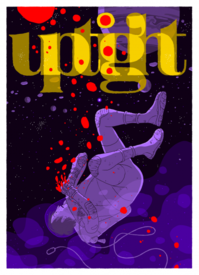 First up is a massive, 52 page installment of the "Keeping Two" saga, by far the longest yet, in which things go from bad to worse -- or do they?  "Keeping Two" is a bit of a self-reflexive work, in that it indicates its awareness that it is providing the reader with a distraction/relief/alternative narrative from/to their own lives by presenting a story in which the central protagonists are distracted from their lives by reading another story, and their experience of reading that story is experienced by the reader of "Keeping Two" as being equivalent in reality to the main "real" story; given an equal weight. Taking this approch implies an equivalency of experience between life as it is lived in the world and as it occurs on the page; both are positioned as equals in the life of the mind.

This is followed by a pitch perfect comics representation of a nightmare,"Wake Up".  This six-page mini-masterpiece, which originally appeared in Monster 2013, is amazingly effective, despite -- or perhaps because of -- its brevity, in capturing the off-kilter, symbol-laden helplessness of the bad dream that the dreamer inevitably struggles to awake from.

Next up is this issue's big surprise:  a 25 page science fiction tale, "The Dark Nothing," done up in black and white and purple tone (this is what the cover provides a taste of).  We don't want to give too much away about this one, but suffice it to say it's a story where things don't go as planned.  It provides a counter narrative to the heroic tales of derring-do that are so associated with space adventure.  This is the story that you don't hear.  In this it has something in common with some of Joseph Conrad's tales of the sea.

The issue wraps up with 26 pages of man-against-nature saga that easily doubles as a man-against-himself, "The Middle Nowhere."   Taking a step back from this story one sees it more as an allegory; intriguingly, an allegory that is open to multiple interpretations.  Looked at from one angle, it appears to be a representation of the moment of death, and the transmigration of a soul.  Looked at from the other side, it appears as though it were the story of an entire life, from the boredom of an isolated childhood through the crisis of adolescence which leads inevitabley to being "trapped" in a marriage before finally escaping either in death or divorce -- it's uyp to the reader to decide!

Jordan Crane has been producing Uptight for over a decade now, and this issue is by far the most substantial. Uptight's focus is the unholy trinity of stress, anxiety and despair, yet the comics themselves clearly embody a struggle to overcome these.  For all the darkness that pervade these comics, Crane is on the side of the angels.  In pen and ink he grapples with his personal demons with great finesse and fine craftsmanship.  The work bears an undeniable imprint of Jaime Hernandez's pen and ink mastery, especially in the use of blacks (which one could argue originates with Toth, but let's not go there right now).  Crane is obviously a fan of Japanese comics, and so it is unsurprising that there is also very much of a manga feel to the unfolding of the respective dramas present here.  Jaime and Toth both follow Kirby in searching for the key moment to embody a scene, whereas while Crane strives to achieve this goal as well, he also follows the manga muse in his quest to unpack a moment, to find it in the connection bewteen a series of panels.  The final panel of "The Dark Nothing" can stand as synecdoche of this approach, as a series of dimly connected flashes occuring with near simultaneity on a ring of asteroids in space momentarily shine a light on the mysterious force that connects them, in a way analogous to Crane's intention in illuminating a moment in a closely observed and connected series of panels.

This item belongs to the categories: Collections, Small Press Comics, Copacetic Select
This item is part of the series: Uptight
You may also enjoy these related titles: