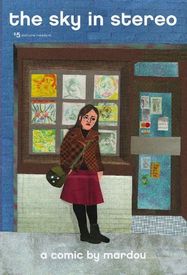 Hailing from the UK (Manchester), but currently residing – and making comics in – the US (St. Louis), Sacha Mardou, who, as a comics creator, goes simply by Mardou, has been dilligently and unobtrusively producing insightful and entertaining comics that have been gradually accreting into a small but significant body of work.  Long a Copacetic favorite, her comics have been steady sellers at our shop and it has been been our intention to bring them to the attention of our online custmers for quite some time.  Now, at last, with the release of The Sky in Stereo, the first installment of what looks to be by far her most ambitious project yet, we are offering these excellent self-published works online.  In the world of self-published comics, those by Mardou stand out for their strength of characterization as well as the naturalness of their narratives, both brought to life on the comics page through a holistic traditional comics where story takes precedence over style.  Mardou is unerring in her sense of editing and pacing.  When writing a scene and composing it on the page, she knows which details to put in and which to leave out.  While her comics are not auto-bio, she stays close to home and writes about what she knows.  Her stories feature the lives of young women and men that are like – and surely based in part on – her self and her peers.  Many comics readers – and certainly most Copacetic customers – will find themselves on familiar terrain reading these stories.  It is a world of work and worries – most often about men* and meaning (*or boys, as the case may be); of adventures that as often as not involve sex, drugs and rock 'n' roll, as well as the occasional trip to the cinema; where characters walk or ride the bus (or train) at least as often as they drive a car.  In other words, it's the world we live in, as we know it:  Mardou's comics offer a revealing mirror of our lives.  Comparisons are easy and often facile, but we would be remiss if we did not point out what may already be obvious, which is that Mardou's comics are sure to be appreciated, and likely to be enjoyed, by any fan of Love and Rockets.  So, where should you start among these several comics?  Anywhere.  These stories are all complete within themselves and each can be read on its own.  The second installment of The Sky in Stereo will, upon its release later this year, be the first exception, as it will be best read after the first part we are now offering here.  Back in stock! (warehouse find)

This item belongs to the categories: Small Press Comics, Handmade, Copacetic Select
You may also enjoy these related titles:

The Sky in Stereo 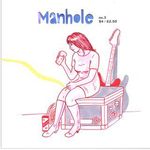