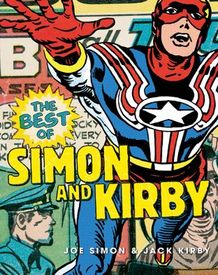 Just say no to those horribly overpriced and poorly produced Marvel Masterworks and DC Archives editions and say hello to this sumptuous oversize hardcover edition that does it right.  Not only is this 240 page book, at 9" x 13", a full 30% larger than these volumes, but the images are taken from excellent resolution scans of the original comics and it is printed on high quality flat white stock, and, as if that weren't enough, it is priced 20% less!  Kudos to the fine folks at Titan Books for a job well done.  And then there's the work itself.  The over two dozen tales taken from this two-decade-long partnership that are contained in this volume amply display the breadth of vision and amazing ability of this dynamic duo.  The work is divided by genre and then presented chronologically within each of the categories, which are:   "The Heroes," "Way Out Science Fiction," "War and Adventure," "The Birth of Romance," "Crime Drama," "The Great Western," "Oh! The Horror!" and "Sick Humor."  Simon and Kirby really could do it all!  While we here at Copacetic will always maintain that the creative engine was primarily powered by Kirby while the business brains and marketing savvy were Simon's, Mark Evanier, working with the still living Simon to put out this volume simply repeats Jack's consummately diplomatic response to the question of who did what – "We both did everything" – and leaves it at that.  No matter how you look at it, though, this team was one of the most important in the history of comics, and this is a book that no self respecting comics fan should be without (unless, or course, they already own the original comics, in which case our hat's off to them). • edited by Steve Saffel, with essays by Mark Evanier and an introduction by Joe Simon

Monsters: The Marvel Monsterbus, Volume One