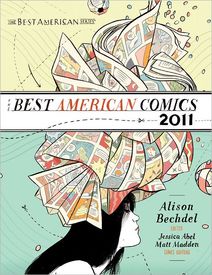 edited by Alison Bechdel   This year's volume gets off to a good start with Bechdel's own illustrated introduction wherein, in addition to introducing the work that follows she meanders autobiographically and waxes philosophical in and about comics.  It must mean something that this year's volume is the first in which there was a substantial amount of work that we here at Copacetic were not previously familiar with.  It seems that we can no longer keep up with all the deserving work out there.  As it doesn't feel like we're reading any less, the only conclusion to draw is that there's even more good work out there than we can keep up with.  A good sign, indeed!  The contributor list includes the essential work by those key artists whose work over the past year it is the first and foremost responsibility annual "best of" collection to present: Jaime Hernandez, Chris Ware, Joe Sacco, three of the best cartoonists of our times, did some of the best work of their career over the past year, and it is duly represented by excerpts here.  Dash Shaw's Bodyworld also receives a massive excerpt here (second in length only to Sacco's), and there are about a half dozen additional excerpts, most notably from Kevin Huizenga, Jeff Smith and Ken Dahl.  Then there are the short pieces, from all over, many of which – for the first time, as we noted – were new to us.  Included under this category are David Lasky and Mairead Case's "Soixante Neuf," Michael DeForge's "Queen," (how did we miss this one?), cover artist Jillian Tamaki's "Domestic Men of Mystery," Eric Orner's "Weekends Abroad" and Angie Wang's sumptuous "Flower Mecha."  Other great short pieces that we had already read and were glad to see here, include stories by Gabrielle Bell, John Pham, Joey Alison Sayers (from Papercutter, our favorite comic book anthology series), Noah Van Sciver, the webcomics sensation Kate Beaton and Paul Pope.  And we can't leave without mentioning the six-page "Anatomy of a Pratfall" by Peter and Maria Hoey from their self-published comic book series, Coin-Op.  This is a strongly Joost Swarte-inflected piece that would have been at home in Raw Magazine back in the day; it also reminds us, in its complexity, of some of Michel Gondry's more adventurous music videos.  We weren't hep to Coin-Op before reading this year's Best American.  Now we are; that's the idea.  NOW ON SALE! (Please Note:  these copies have a slight remainder mark on either top or bottom page edge)

This item belongs to the categories: Small Press Comics, Gift Catalogue, Anthologies, Special Sale
This item is part of the series: Best American
You may also enjoy these related titles:

The Secret to Superhuman Strength