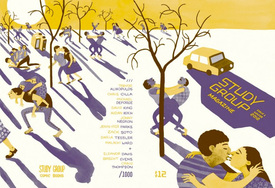 edited by Zack Soto   Anyone on the prowl for a new comics anthology to sink their teeth into since the demise of MOME is sure to be pleased by the promising first issue of Study Group Magazine currently beckoning from the Copacetic central display table.  Rising from the fertile loam of the Portland, OR comics scene, it is edited and published by Zack Soto and features some delectable work from some of the freshest talents chosen from among the current crop of comics creators, including Malachi Ward, Aidan Koch, Michael DeForge, Chris Cilla and cover artist, Eleanor Davis, who is also the subject of an interview and who provides a nice transition for MOME readers, as her story was one of the highlights of MOME's last issue.  Study Group Magazine's format is a tall vertical format (8 1/2" x 12") printed in deep sepia against a light purple and deep yellow duo-tone color scheme that reminds us somewhat of the NoBrow aesthetic.  A highlight of this issue is an excellent, in-depth, heavily illustrated – with character studies, thumbnails, layouts, and finished pages – 17 page interview cum essay with Craig Thompson conducted and assembled by Milo George that focuses on his approaches to making comics in general and the creation of Habibi in specific, as well as providing valuable insight into his career and development as an artist. In addition, there is an appreciation of European comics wunderkind Brecht Evens by Greice Schneider that provides some food for thought.  Did we mention that it is a numbered addition of 1000 copies? that DeForge's contribution is an instant cartoon classic that will burrow deep within your subconscious mind and take up residence?  All in all an auspicious debut.

TEMPORARILY (WE HOPE!) OUT OF STOCK.  PLEASE CHECK BACK.

This item belongs to the categories: Small Press Comics, Anthologies
This item is part of the series: Study Group Magazine
You may also enjoy these related titles: