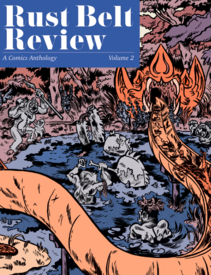 Right on schedule, here's the second volume of Rust Belt Review.  Edited and published by Sean Knickerbocker, this issue is another over-sized (9 1/4" x 12") issue, nicely printed on flat, off-white stock, but this time around we have an extra 20 pages of comics! (Along with a slightly higher price, as a result.)  Life in the rust belt emerges in a somewhat more unified fashion this time around, as their is plenty of common ground between these stories:  movement, as characters in these stories, drive, ride, bike and walk from point A to point B (and in more that one instance [and more than one way] find their travel interrupted for reaching their destination);  various forms of violence and threats thereof, are encountered, involving the intentional use of weapons as well as the inadvertent use of vehicles; sexual (or sexualized) behaviour is another common thread weaving its way through most of the stories in one form or another, including acts, physical and verbal play, innuendo, and also sublimation.  Each of the seven contributors to this issue takes their own personal approach (about which we hope to have the chance to elaborate a bit on), and so there is a great deal of diversity within this common ground – which is very much the point of a regional anthology!  Plus, an essay by Juan Fernandez, "Comics Is a River."  A solid second issue!

This item belongs to the categories: Anthologies, Made in Pittsburgh, Small Press Comics
This item is part of the series: Rust Belt Review
You may also enjoy these related titles: