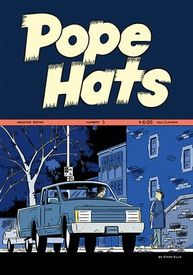 Wow!  Ethan Rilly just keeps getting better.  Anyone interested in deftly delineated character driven narratives in the tradition founded by Xaime and Beto Hernandez needs to be aware of this series.  Rilly is a relative youngster and his work – set in what we are assuming is Toronto (Rilly is a native), but could be Seattle, or any other major north American metropolis, for that matter – is closer in register to the work of Adrian Tomine, as it is largely set in a world of office towers and upward striving.  Anyone unfamiliar with this series can get some idea of what's in store by checking out the short 2010 piece, "Ex Montreal", hosted in its entirety on Rilly's site, here.  Each issue of Pope Hats proceeds from the previous issue, but can be enjoyed on its own.  This is a good thing in more ways than one:  as the series has been clocking in at a rate of less than one issue per year, it's difficult to remember all that has come before; but you can't rush quality, and we're glad to wait for something as good as this.

This item belongs to the categories: standard pamphlet comic book
This item is part of the series: Pope Hats
You may also enjoy these related titles: