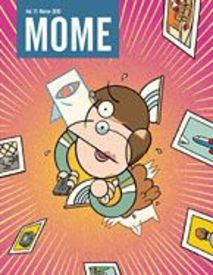 edited by Gary Groth and Eric Reynolds There's no question that the highlight of this issue is the thirty page conclusion to Paul Hornschemeier's Life with Mr. Dangerous, which began its serialization in MOME all the way back in the first issue!  Next up in the list is the first ever (to our knowledge, anyway) collaboration between the mighty Dash Shaw and Tom Kaczynski, the aptly titled, "Resolution."  Also on hand are the second parts of both T. Edward Bak's "Wild Man" and Ted Stearn's new Fuzz and Pluck adventure, "The Moolah Tree," as well as the first two parts of Oliver Schrauwen's latest, "Congo Chromo."  Laura Park, Sara Edward-Corbet, Rick Froberg, Kurt Wolfgang, Derek Van Gieson, Renée French, Josh Simmons and Michael Jada round out the issue.  MOME continues to deliver on its promise.

This item belongs to the categories: Anthologies
This item is part of the series: MOME
You may also enjoy these related titles: