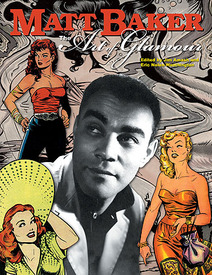 Yes!  Matt Baker is one of the all-time greats of Golden Age and Atom Age comics.  His lack of greater fame is largely due to the fact that he eschewed delineating superheroes – at least of the masculine variety – instead choosing to focus largely on employing his prodigious talents in the service of bringing a long line of feisty fighting female firebrands to the comics page.  While Baker made a mark with his minor foray into the world of caped crusaders with the infamous Phantom Lady (singled out by Dr. Frederic Wertham in Seduction of the Innocent for her heady "headlights"), he is best known for his down to earth women.  Some of these were serially recurring characters like the military-based, Canteen Kate, and, especially, the more exotic types like South Sea Gal, Vooda, Tiger Girl and, of course, Sheena, which were Baker's forte.  The core of Baker's oeuvre, however, was the parade of women who populated the pages of Crime and, especially, Romance comics published by St. John's Comics during the late '40s and early '50s in titles like Authentic Police Cases, Diary Secrets, Pictorial Romances and Teen-Age Temptations.  And he did plenty more besides, managing to produce an immense body of work in his all-too-brief 38 years of life, which ended in 1959.  Local Copacetic customers will be interested in learning that, shortly after his North Carolina nativity, Baker's family moved to Pittsburgh, and he grew up right here in Homewood.  In addition, it is worth pondering a moment the fact that Matt Baker was one of the few – and by far the most successful – black men to work in comic books during their formative, pre-code years.  Matt Baker is a comics figure worthy of attention, and with this volume we have a good place to start.

Sheena: Queen of the Jungle