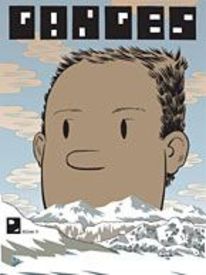 It's been almost a year (more?) since we've seen anything new by Kevin H. (not counting the self-published mini, Sermons #2), so it was with no small trepidation that we cracked open the second issue of Ganges. which is the 27th in the Ignatz series.  What surprises will it hold?  Well, we certainly don't want to rob you of this experience, so we're not going to go into too much depth here, but we will say this much:  This issue has a bipartate structure.  The opening section is a bravurra performance on Huizenga's part, in which he takes on a challenge that is dear to many cartoonists of his generation (Brinkman, Chippendale and Paperrad foremost among them):  that of portraying the inner vision of the inveterate videogamer.  Huizenga ups the ante here by going one step further and attempting to depict the ideational transformations that are brought about by continual gaming.  Employing a (nearly)purely visual approach that is in places reminiscent of the work of Jim Woodring and Ron Regé, Jr., he presents his vision in such a way as to imply that these transformations may involve actual organic restructuring -- although this latter implication is somewhat undercut by the conclusion of the piece, which is not so much a story as it is an experiment in visualization.  The following part, "Pulverize," which takes up 2/3 of the issue, is a more mundane piece.  Another of Huizinga's fictionalized, semi-autobiographical accounts of the type that dominated the first issue of Ganges, it provides an enjoyable, straightforward account of time spent working in a dotcom startup that involved a lot of after hours videogaming.  Here, however, it serves the additional (one might even say primary) function of providing the "real world" context -- the objective outer vision -- for the subjective inner vision of the opening pages that precede it.  Suffice it to say there's plenty of food for thought here; the only question is, will it be enough to sustain readers until the next Huizenga release?

This one is now out of print... but we have ONE nice copy, should anyone be interested.