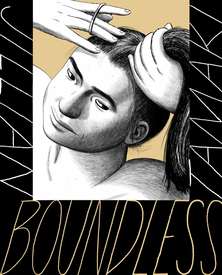 Boundless is a 248 assemblage composed of nine tales:  World Class City; Body Pods; The Clairfree System; 1. Jenny; Half Life; Darla!; bedbug; Sexcoven; Boundless.  Each is possessed of its own individual artistic personality, chosen to best visually convey the character of the story:  rough and ready; smooth and silky; precise; loose; colorful; stark.  Here, the real story is the way in which the tale is told.  Decision embodied in line and composition.

Each of the pieces, while being a unique organic whole in and of itself, is part of a greater whole as well; part of a tapestric unity.  These stories deal with individuals alone, together and in groups.  They explore the dynamics underlying each and map their respective organizational structures.

A theme running through each of the pieces is the struggle for connection, and the wide variety forms that this struggle can take.  In particular, these stories are about the tendency of contemporary communications media to mediate our lives – and, increasingly, our relationships*.  These stories expose ways in which our increasing “connectivity” via electronic devices can paradoxically (or perhaps not) result in alienating us from ourselves and each other; virtual connection supplanting actual connection.  Also threading its way through the stories are indications of how social organization in fully developed (late) capitalistic societies tend to essentialize human relations within a framework of financial transactions, with profit and loss, winners and losers, exploiters and exploited.

From "Body Pods," a tale of a life lived in the shadow of a hit film, to "Sexcoven"’s meta-documentary take on an internet based cult in which immersion in computer connectivity leads to a dropping out of normative society, to "1. Jenny," which relates a quasi-literal loss of identity to social media, personal relationships are disrupted and/or deformed by interactions with media.  In a tour de force of form countervailing content, Tamaki pens a narrative for "The Clairfree System" that loosely and impressionistically portrays a business model – more or less Amway® meets Proactiv® – that locates synergies between narcissism and the religious impulse in forging a sales pitch touting improved social standing (aka "happiness") through adherence to its tenets, yet she deliberately and completely undermines the logic undergirding this pitch's argument by applying an especially high level of attention to the artistry and aesthetics of the visuals bracketing it.  The one-two punch of the mastery on display in this series of images – which, in their relation to the narrative, range from directly representational to tangentially so, from complementary to oppositional – and the elusive mystery they contain completely overwhelms any seductive allure that the narrative might have offered, and so posits – perhaps – the power of craft and artistry to reconnect us to our human selves away from technology and the exploitative capitalistic relationships that technology serves to support.  Tamaki takes a different approach to reconnecting our consciousness of self with our physical bodies in "bedbugs", a tale which embodies some elements of morality play.  Amidst the collection's overall story space, which has been engaged in documenting the body's gradually disintegrating connection to self in an ever more virtual world, we are given a moment to contemplate the repercussions of this disintegration.  As our lives become ever more rife with virtual parasites that consume ever larger degrees of our energy and attention – leaving us with diminished assets to devote to the actuality of ourselves – we here find real, live insect parasites surreptitiously insinuating a consciousness of the physical human body.

The title story is an irony that folds back on itself in positing a reality completely bound by irrevocable limits from which one may be released only through a complete acceptance of and submission to them.

Boundless feels at times to be delivering a thesis that all human actions contain an element of struggle for connection, and that the goal of the stories in this collection is to locate that element in each action, properly situate it – identify its psychological coordinates –  and then, working from there to reverse engineer the design of their motivation and so provide readers with insights that can deepen human connection in ways not available to the ever more pervasive connectivity proffered by technology.  Lines on paper vs. dots on a screen.

This item belongs to the categories: Collections, Copacetic Select, Featured Item
You may also enjoy these related titles:

This One Summer (hardcover edition)