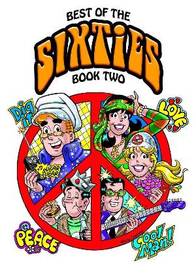 Please do your best to ignore the cover illustration -- which only proves how clueless the powers that be at Archie Comics are -- and instead focus on the name Harry Lucey.  The evidence of this volume indicates at least the possibility that the fact that they are sitting on a treasure trove of work by one of comics' true geniuses – namely, Harry Lucey – may finally be dawning on the people currently at the helm of Archie Comics; or it might be simply due to the fact they are in possession of such an embarrassment of riches that they simply stumbled onto such a large number of Lucey classics.  Whatever the case may be (and it may very well be the latter as Lucey STILL remains uncredited on all the work he produced for Archie; there's nary a mention of this comics great, even in this collection of which over half is devoted to his work -– Oh, the shame of it!  Even the monstrous Walt Disney Company eventually [after 40 years – but it's been longer than that for Lucey!] relented and allowed Carl Barks to be credited) this volume contains ten – count 'em! – solid Lucey classics from the 1960s.  Lucey is one of the original comic book artist "lifers" -- those who started their career in the original "Golden Age" of comic books in the 1940s and then dedicated their entire professional lives to creating comics.  The arc of his early career was fairly typical and resembled that of many of his peers:  beginning with heroic fantasy before moving on to crime and romance comics along with the trends of the day; but then he discovered his true calling with Archie.  Starting in the late 1950s and running through to the mid-1970s, Lucey contributed between one and four stories to nearly every issue of the flagship title, Archie Comics, along with plenty of contributions to other titles, and who knows how many classic covers, producing during this 15-year run one of the most engaging and entertaining bodies of work in the history of comics.  In the process Lucey developed a strong, and singular personal style that has won adherents among some of today's most important comics creators -- most notably Jaime Hernandez, who is one of the very few who makes a point of singling out Lucey for praise -- as well as animators.  He originated a vocabulary of body language that stands alone.  And throw away any preconceptions you may have about Archie Comics being uniform in their blandness.  While it is certainly true that much of their output is trivial and boring, and the characters have been embarrassingly compromised on more than one occasion by the publishers' various relationships with the evangelical Christian community, Archie Comics remains one of the most important publishers in the history of comic books and Harry Lucey's work is their greatest legacy... if only they would wake up to this fact (good God, what will it take?)!  Lucey continually experimented with the form, and -- crucially -- he had years of experience under his belt, during which time he not only gained a fully developed set of both story-telling and rendering skills, but from which he came into the possession of a thorough and strong grasp of the medium as a whole.  As a result his experiments continually bore fruit, resulting in the creation of many unique works – the majority created with his primary collaborator, script-master Frank Doyle.  Most notable in this regard is his employment of "direct address."  There are quite a few classic Lucey tales in which Archie, Jughead, Betty and/or Veronica directly address the reader and engage them in a deconstruction of the narrative as -- or sometimes before -- it transpires.  He was also the master of pantomime comics, as this classic posted at The Copacetic Gallery attests.  Anyway... to get to the point:  while this volume we're hawking to you here barely scratches the surface of the work of Harry Lucey and contains none of his very best work, it still makes for the best single volume of Archie Comics currently available and is eminently worth the while of anyone who enjoys comics as well as anyone who wants to learn how to add a little magic to their own comics making efforts.  While we're not 100% certain of this fact -- as duties were often shared at Archie Comics and Lucey may only have a hand in some of these as opposed to being the sole artist (for example, we're pretty sure someone else worked on the last story in the book, "The Line," but it still has enough trademarked Lucey-isms to make us believe he was involved) -- we believe that all the stories in the book are by Lucey (if not soley, then at least in some capacity), except those on pages 12 - 41.  So, dig in!

This item belongs to the categories: Classic Comics Collections, Kid Friendly
This item is part of the series: Archie
You may also enjoy these related titles:

The Best of Harry Lucey, Volume One

The Best of Archie Comics