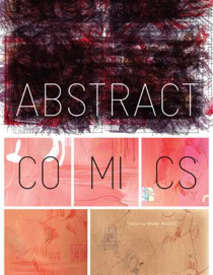 Andrei Molotiu, college professor, art historian, and all-star poster to the TCJ message board, has pulled together a wide ranging assortment of works under the banner of "abstract comics."  Molotiu well understands the vagaries that will attach themselves to an overly broad designation such as this and has penned a cogent introduction to give readers as idea of his thoughts about what areas this label could assist in classifying.   Importantly, he is well aware that this primary purpose of this collection is to get the conversation started.  And this it has already accomplished, as the numerous posts to the Abstract Comics Blog firmly attest.  Artists represented in this volume range from celebrated masters such as R. Crumb, Gary Panter and Patrick McDonnell, to accomplished practitioners of the comics arts such as James Kochalka, Lewis Trondheim, J.R. Williams and John Hankiewicz, to marginally known art comics figures like Richard Hahn, Jason T. Miles, Blaise Larmee and Warren Craghead III, but the majority of contributors are obscure figures working on the margins that few readers of these pages will be familiar with – at least in the context of producing comics – such as editor Molotiu himself, who turned in eight pages of free floating abstractions, and Copacetic's own Bill Boichel whose entry is a 24-page mini-comic that has been reformatted as a two-page spread.  Yet lack of renown should not be conflated with lack of artistic vision as some of the most engaging works on display here are by the least recognized artists.  OUT OF PRINT!