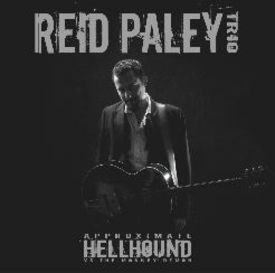 
"As a form, the blues is an autobiographical chronicle of personal catastrophe expressed lyrically."


We whole-heartedly agree with the late, great Mr. Ellison that blues is more accurately defined as a mode of expression than a style of music.  While the loud, raucous and wide ranging music contained on this disc could hardly be mistaken for your typical 12-bar AABA blues, Approximate Hellhound, the arrival of which has been highly anticipated by the Copacetic Comics Co., is nevertheless as full blooded an embodiment of the blues as you're likely to find anywhere.  Depending on how you look at it, this new CD is either Reid Paley's third full length solo production or the premiere of the Reid Paley Trio on disc; or both; or neither.  You decide, it's too complicated for us.  It really doesn't matter though, because no matter how you look at it this disc is well worth listening to and the music it contains will change your way of thinking about the definition of musical forms.

There's a lot of experience packed into this Metaphor Rhythms release.  The Reid Paley Trio has performed  extensively:  both headlining and opening (often for Frank Black); around the USA, the UK and Europe, and above all in New York City, where thay have carved out a niche for themselves -- in the city that has seen it all, the Reid Paley Trio is recognized as a truly original act.  Mr. Eric Eble, studiously propulsive and emphatically nimble on Czechoslovakian upright bass (on four of this disc's tracks, the quite suitably named Ms. Daria Grace is on the bass), Mr. James Murray, who rips it up and then puts it back together again on drums, and the inimitable Mr. Paley himself on vocals and electric archtop guitar -- know a thing or two about rocking out.  Listening to this disc for the first time is an experience akin to that of suddenly realizing that the movie you inadvertently ended up watching at three in the morning has you riveted, and you find yourself thinking that it is the most amazing thing you've ever seen.

That said, it is also the perfect record to play on those days when you feel like something is holding you back and you're having trouble getting going:  it will kick you in the ass and you'll be on your way.  There are no muddled half-formed thoughts vaguely expressed here, no way!  This is a record that has the courage of its convictions.  It's straight ahead.  There's little room for doubt as to where these songs are coming from and what they're saying.  The only question is:  what are you going to do about it?  The ten tracks on this disc flow like a conversation, each one picking up where the other left off, generating a persuasive musical argument that drives its train of thought to the end of the line.  Our favorites include:   "Take What You Want," an R & B rocker that has been covered by Frank Black and the Catholics;  "Everything Is Going Wrong (& That's Alright)," a song for our times if ever there was one; "Better Days," the masterful centerpiece of the record (and our favorite), is a paradoxical work that is a unique hybrid of gospel and blues sensibilities (the gospel according to Reid is, however, not like any gospel you've heard before) that pulls off something that we would not have thought possible if we hadn't heard it with our own ears -- managing to be simultaneously mournful and triumphant (you try it); "Someday I'll Be Okay," is a song that delivers a frisson unavailable from any other vendor; and, finally, the closer, "Stay Awhile," an anthem that one can well imagine receiving heavy play on Sisyphus's iPod.

So, buy it already.  Life is short.

Learn more about Reid Paley and the Reid Paley Trio at their official website.

Check in with the trio at their MySpace page and listen to a couple tracks from the new CD, along with one each from the first two.

And, if you feel like getting another point of view on the whole Reid thing, we recommend that you read this interview-cum-essay by Jennifer Kelly on PopMatters.

This item belongs to the categories: Copacetic Select
Search Copacetic
Just in:
See all recent arrivals...
Copacetica
Edifiying essays about all things Copacetic