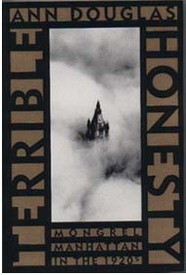 This volume comes as close as any one book can to first uncovering and then diagraming the myriad ways which, in New York City, during the 1920s, the United States of America created and then defined a new way of organizing the intellectual civilization that apprehends the reality of our world.  Up until this point the reality of the west that the United States saw itself as a part of had been built up through a gradual accretion of intellectual developments over the centuries in the "old world"-- primarily, but certainly not exclusively, Europe.  A definitive break was made in the wake of the First World War, after which, as this book demonstrates, the "new world" of the United States forged ahead on its own, and Manhattan was the crucible of this transformation.

The foundation of the United States had been constructed out of those elements of what its founders and guides perceived as best in contemporary, Christian, and classical European civilization, with, naturally enough, a large bias towards its British component.  At the conclusion of WWI, however, the US found itself ascendant if not actually dominant in the western world and while the center of political power in the US was, of course, Washington, the cultural capital was unquestionably Manhattan, and it was here that, emboldened by their nation’s nascent position of growing power, a new way of being was erected upon this foundation that was carved out of the essence of America.  And within the cultural sphere at that particular historical juncture nothing was more essentially American than the African-American culture that had risen in Harlem.  Douglas demonstrates time and time again in the pages of Terrible Honesty that a key element in distinguishing American culture from European was-- and by extension clearly continues to be-- America’s inclusion of its African cultural heritage, whether intentionally or, as was more likely-- at least at first-- unconsciously.

And let's not forget the epochal ninety page bibliographical essay that concludes the volume. It puts the knowledge of the ages at your fingertips.  Read this and you're good to go.

Terrible Honesty is -- or at least so we argue -- one of the most significant books of cultural history of our times, don't miss it!